ALONSO DOES NOT LEAVE THE MERCEDES DOOR ..BERNIE HELPS ALONSO 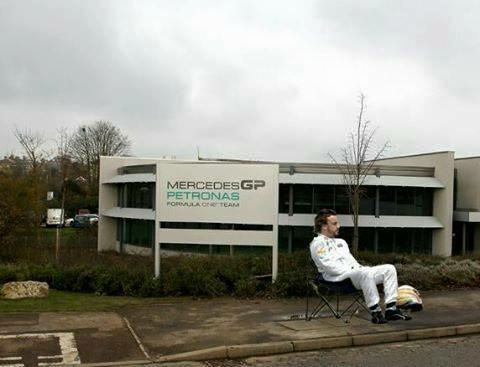 I give LUCK and when Alonso was in São Paulo, I tried several times to talk to him .. but he did not .. I felt that it was going to happen A GOOD THING FOR ALONSO and I wanted to say that to him .. I wanted him to sign my cap from when he was champion And the shirt I have when I was a Champion for the Renault .. but I could not .. I give LORRY IT WAS THAT IT WAS TO HAPPEN. All of us who like racing and Formula 1 want Alonso in Mercedes, to improve Formula 1 the audience is very annoying and certainly the dispute between 2 excellent drivers like Hamilton and Alonso will be great but without a hitting in the other or between them. Honest dispute in the Track without fights one compressing the other when he wins Mercedes is an honest Team and already showed this .does 2 cars alike .. and for that to happen Bernie Eclestone has to help Bernie is the Genius of business does not let anyone fight .. And knows to make the financial agreements without quarrels .. The World wants to see Hamilton and Alonso in the Mercedes in 2017 hug to all

Journalist Lionel de Campos Jorge
Posted by Formula1Lionel at 18:29 No comments: Links to this post 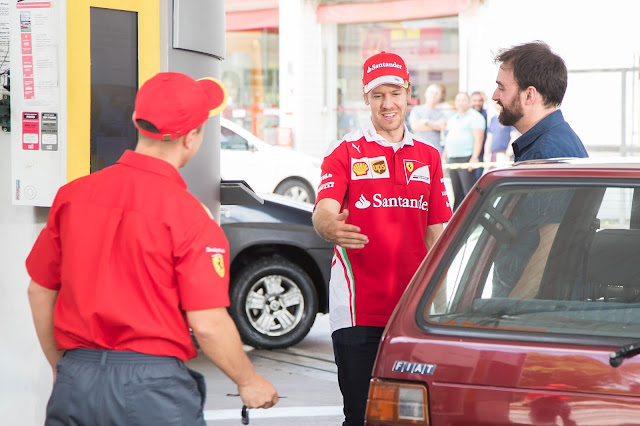 10/11/2016, Sao Paulo, Brazil: Four-time World Champion and Scuderia Ferrari Driver Sebastian Vettel delighted Shell customers in Sao Paulo on Wednesday morning when he made a surprise visit to a filling station ahead of this weekend’s Brazilian Grand Prix.

Customers in need of some Shell V-Power unleaded fuel were amazed to see the 42-time Grand Prix winner waiting to help fill up their cars during their morning commute at a filling station only a stone’s throw away from the world famous Autódromo José Carlos Pace venue. 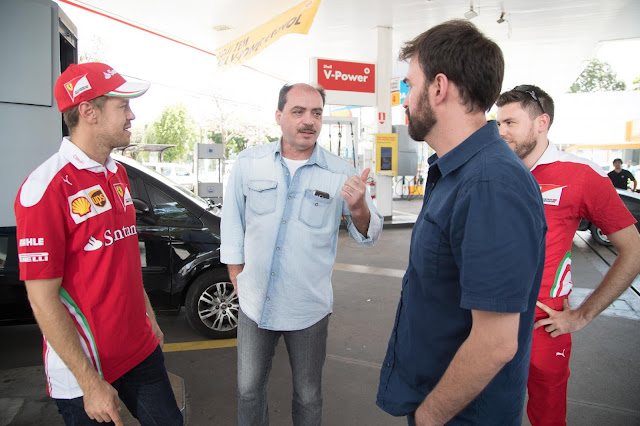 “Motorsport fans in Brazil are some of the most passionate we see on the Formula 1® calendar so it was great to surprise a few of them when they were least expecting it – when filling their cars up with fuel at a Shell station. I always enjoy racing in front of the fans here in Brazil and I hope we are able to give them a good show this weekend. With only two races to go this season I will be looking for a strong result here in Sao Paulo to help finish the year on a positive.”
Sebastian Vettel, Scuderia Ferrari Driver 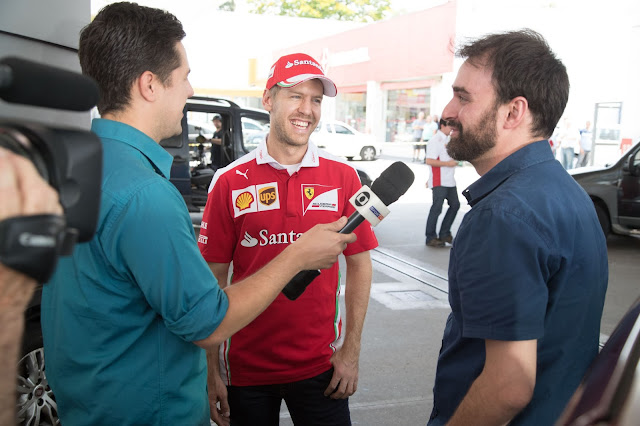 Posted by Formula1Lionel at 16:37 No comments: Links to this post

I always admire Lionel Ron Dennis A lot of people do not like it but when you look at a picture like that up there, how not to admire and respect! Yesterday, exactly 50 years ago Ron Dennis attended a GP for the first time. It was in Mexico City on October 23, 1966. Cooper's mechanic, 19 years old, was called at the last minute because the team rented a car for a local driver, Moises Solana - would be the fifth team in the race. It was up to Ron to take care of the car. 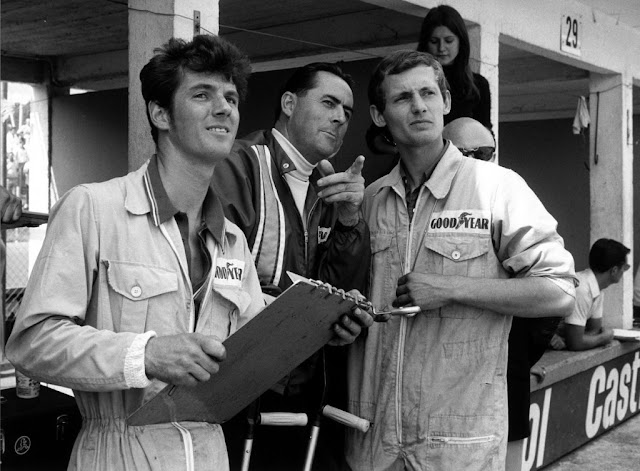 Solana, who has competed in eight races in his life - six in Mexico and two in the US - ended up abandoning his Maserati engine overheating. Another Cooper-Maserati, by John Surtees, won the race.
Ron Dennis says he does not like this picture very much and that Airton senna kept playing with him saying he would show ...

I think the photo WONDER because we give great value to mechanics, who starts below and arrives where he arrived and put in a beautiful picture in his office but show and give an example to everyone of how much intelligence and work he has had since he started until he arrives at the Presidency.
The 19-year-old boy was hired. Years later, I would buy McLaren.
Today, Ron has 25% of the group that includes the F-1 team, and is its president. I consider the BEST TEAM CHIEF has tried several times to sell our project that makes the car walk faster 10% at the least and easy Installation, but we never managed but maybe one day ... would definitely make Alonso win ... we are at the disposal of McLaren whenever he comes to Brazil. Despite the Renault team being interested lately and Ferrari. email LELOF1@HOTMAIL.COM
Posted by Formula1Lionel at 22:52 No comments: Links to this post


Posted by Formula1Lionel at 11:18 No comments: Links to this post

Bernie will follow CEO of F1 bossing everything .. still good

09.07.2016 14:15 - Updated 09/07/2016 20h32
Bernie will follow CEO of F1 for at least 3 more years after sale
85 year old leader has revealed that it will continue as a "strong man" category after acquisition by Liberty Media. Chase Carey will replace Peter Brabeck as president
for GloboEsporte.com
London, England
The acquisition of Formula 1 by the American Liberty Media Corporation conglomerate has generated speculation that the main category of motorsport will win a new face in the near future. But one thing will not change if the agreement is completed. Bernie Ecclestone, the current CEO of the Formula One Group, will continue as a "strong man" behind the scenes. After rumors that the 85 year old leader would command after the sale, Bernie revealed that continue in the same position, while Chase Carey will be the Chairman, responsible for the board of directors, replacing Peter Brabeck-Letmathe, which performs the function for three years .


This is not the first time that Bernie Ecclestone will keep the power in F1 after a sale transaction. Head of Brabham in the 1970s, the British gained influence in the category to become representative of the teams in talks with the International Automobile Federation (FIA) race tracks and on broadcasting rights. Since then, he always remained in a prominent position in F1 management, even past several transactions.
Despite following with power, Ecclestone said that in the hands of Chase Carey, current vice president of 21st Century Fox and former director of DirecTV, the F1 can try new paths in social networks, one of the biggest reasons for criticism of the category in the last years. The two work together in charge of the category.
- The good news is that we Chase the board of directors, and we expect it to be able to bring F1 to new territories in social media. As you know, I never found a way to make money with social networks - said.
Chase Carey will be the new president of Formula 1 (Photo: Getty Images)


Ecclestone praised the current president Peter Brabeck-Letmathe, but also showed hopes that Chase make Formula 1 finally catch on in the US, former leader of the dream: 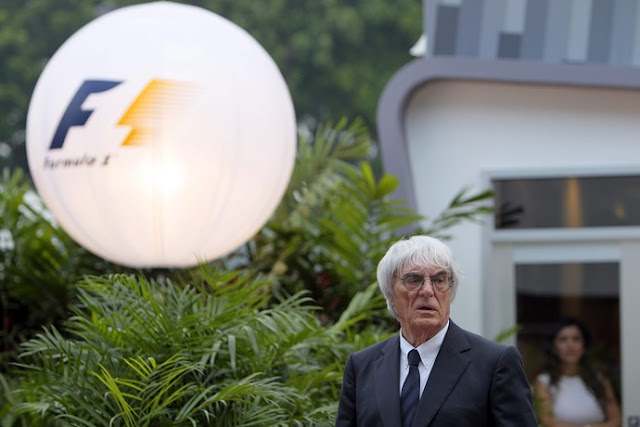 - Peter was a perfect president. But he has no knowledge that Chase has in certain areas. The areas where Chase is famous for his knowledge are areas that I hope you can help us. Chase drove DirecTV in the US, and we are weak in the US. So I hope to have it in the table can help at this point - added Ecclestone.
Bernie Ecclestone with Peter Brabeck in Monaco (Photo: Reuters)

In my opinion it is very respect of Formula 1 Bernie .... Eclestone or comment on your age ... looks like a boy .. full of energy and intelligence to stay in F1 ..da command and all who understand a very distant day if God and Jesus help ..Bernie missing .. will be the end of F1 ... but for now thank God and Jesus bernie is still going strong in command and always making the best decisions for the F1 sign

Posted by Formula1Lionel at 11:17 No comments: Links to this post 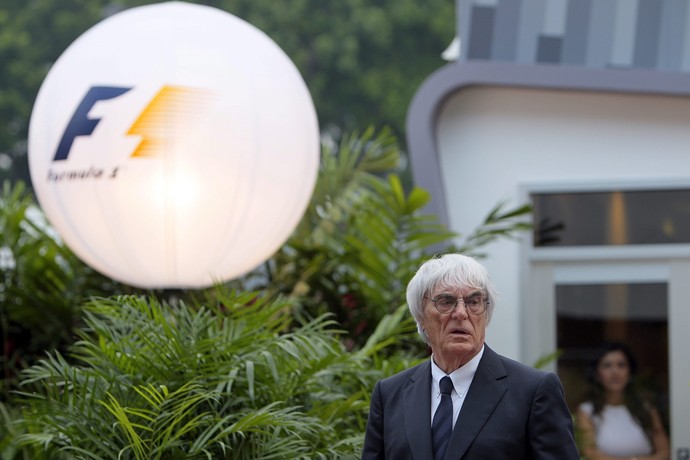 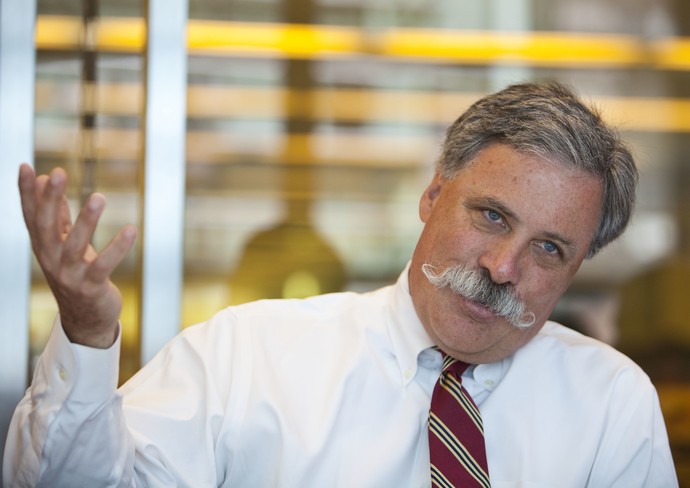 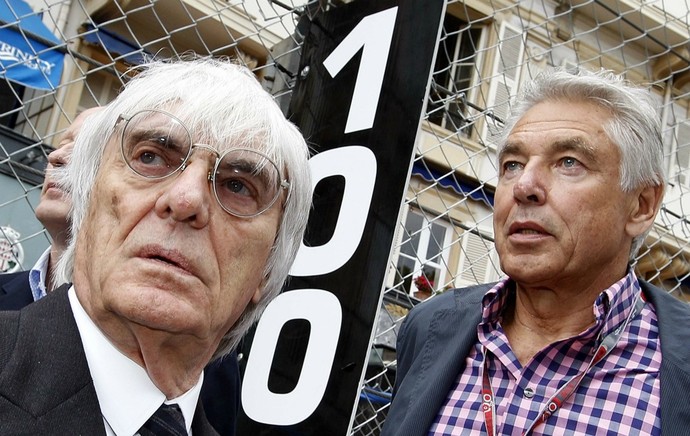 "People should not worry to come to Brazil," says head of F1
August 8, 2016
Bernie Ecclestone, 85 billionaire who heads the company that controls Formula 1, met on Monday with the civil police of DHPP (Homicide and Protection of Persons) responsible for the release of his mother from captivity.
Aparecida Shunck Flosi Palmeira was kidnapped at his home in São Paulo on 22 July. Criminals have called for a millionaire rescue, but police found captivity and released in the last 31.
At least three people were arrested.
Ecclestone gushed and said "people should not bother to come to Brazil."
My Opinion Bernie Eclestone, is one of the richest men in the world and huge IMPOSTANCIA to several countries and companies and was very EDUCATED the statements, ..Bernie Eclestone, walks all over the world every year and never had problems segurança..INFELISMENTE in Brazil had ... is what always say here at Blog ..teve problems because of POLITICIANS THIEVES who steal everything and give bad example to povo..que pays the highest taxes in the world and the billions somem..a police no good compared to first world countries, they are ill trained and earn little give huge problems with drug dealers and various ..or car theft anything like cell, tenis..pequenos parts ..because politicians charge extremely high tax everything give few can buy ..and there steal ... thank God and your Jesus did not die at this caso..mas the Brazil is far from being a serious country ... sorry Bernie Eclestone on behalf of honest serious people and workers of Brazil, as I adimiramos your exelente work in Formula 1, and that God s Son Jesus I bless you and I all your family by that in Brazil this all very hard to live ..
by Lionel de Campos  Jornalist
Posted by Formula1Lionel at 23:00 No comments: Links to this post