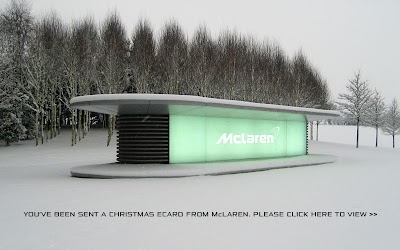 Thank you for the beautiful Christmas card that McLaren has very kindly sent us and we would send the same wishes to the entire team of chief Ron Dennis, Martin, engineers and drivers Lewis Hamilton and now Jeson Button a wonderful Christmas and a 2010 full of victories
http://www.mclaren.com/mediaroom/McLaren-Christmas-eCard.html?utm_source=NL&utm_medium=NL20091217&utm_campaign=NL2009
Posted by Formula1Lionel at 14:01 No comments: Links to this post 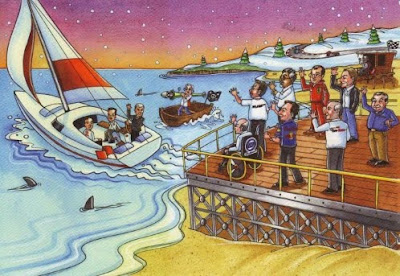 Christmas of F1 is only complete when the card that Bernie Ecclestone is usually sent to the directors involved in the category is revealed. And in 2009, once again the president of the FOM was generous in the game. In the drawing this year, shown to her by Formula blog UK, Bernie did not miss the chance to mock the various controversies experienced by the sport. The drawing shows a deck on the beach with caricatures of Frank Williams, Christian Horner, Franz Tost, Martin Whitmarsh, Stefano Domenicali, Vijay Mallya, Ross Brawn and Frank Williams - leaders of the teams that competed in 2009 confirmed for 2010 - along with Jean Todt , saying goodbye to a boat with Max Mosley, John Howett and Mario Theissen, representing the outputs of Toyota and BMW F1, and the output of the command Mosley of the FIA. However, there is more detail: while sharks are around three of the boat, looking with sad faces to the beach, Flavio Briatore appears in a "pirate ship" with a bazooka pointed at Mosley. Far from everything, even the Ecclestone is shown sitting in a kiosk rescue and two F1 cars travel through a curve at the bottom
Posted by Formula1Lionel at 14:00 No comments: Links to this post

The guy who knows more about Formula 1 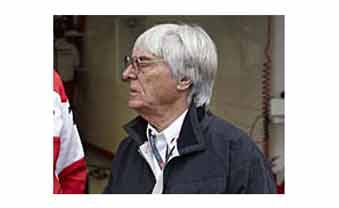 (24-12-09) - Bernie Ecclestone reckons that the return of Michael Schumacher will make the 2010 season is "jaw dropping" and is a huge boost to Formula 1. After the negative headlines caused by the departure of the makers and the political fights of early 2009, the return of Schumacher with Mercedes, the departure of Fernando Alonso to Ferrari and double world champions McLaren - Lewis Hamilton and Jenson Button - created a great enthusiasm for the championship next year. Ecclestone said that this proves the power of Formula 1, and epic disputes expected in 2010. "I always said that Formula 1 is a strong brand," he told the official website of the category. "She has shown many times that can recover by itself. And yes, all indications point to a season of jaw-dropping. The fans will love." "I think it's fantastic for Formula 1 Schumacher is back. But at the same time, I also believe it's good for Michael. When pilots run for many years, sometimes they lose focus and motivation - was probably one of the reasons for his retirement in 2006 - but now he regained his strength and has a level of motivation than 100 percent will give us many exciting races in 2010. " Ecclestone believes Schumacher will fight for the title, noting that his ability in the development may be valuable for the Mercedes. "Forget about winning races - he's on my list to win the championship," he replied when asked if you think Schumacher will be a winner next year. "He will have an immense value to the team in developing the car. We have all seen in the past that he was never satisfied unless the car was in perfect condition. With his desire for better and deep technical knowledge, it will save valuable time for the team. "
by jornalist Lionel de Campos Jorge lelof1@yahoo.com.br
Posted by Formula1Lionel at 14:00 No comments: Links to this post

Spa Grand Prix Team has the pleasure to wish you a Merry Christmas and Happy New Year for 2010.