Following a brilliant performance in Abu Dhabi, where we saw Fernando Alonso finish on the podium, we have only two races left of the 2012 Formula One™ season and we’re off to America for the first time since 2007 – only this time, on a brand-new track.

The Circuit of the Americas (COTA) is the first purpose-built Formula One track in the United States. Located in Austin, Texas, it was officially opened last month by 1978 F1 World Champion and COTA ambassador Mario Andretti.

Like many of the newer Formula One tracks, COTA was designed by renowned circuit architect Hermann Tilke. And he drew his inspiration from some of the most famous Formula One circuits in the world.

So while the drivers power their way round the track, they’ll be reminded of both Silverstone and Hockenheim. By the time they get to turns 16 to 18, you’ll notice they’ll find that it’s almost a mirror image of the infamous double-apex turn eight at Istanbul Park. Mirror image because, like only four other tracks in the 2012 calendar, it runs anti-clockwise. And with more left-hand turns than right it puts even greater physical demands on the drivers – especially their necks.

With Fernando Alonso sitting in second place in the Championship it should make for an exciting race as he tries to reduce his 10 point deficit. Especially as the circuit has been purposely designed to widen on specific corners to allow drivers to choose multiple lines and encourage overtaking.

The ups and downs of Formula One
While parts of the layout might seem familiar, one thing certainly won’t: the rise and fall of the track. COTA was designed to utilise natural topography. There’s a dramatic climb to the highest point of the circuit – the all-important turn one – and during one lap, there is a change in elevation of 133 feet (40 metres) - that’s about the height of a 13-story building.

While the track is purpose built for Formula One, it will also play host to a number of other races, including the Ferrari Challenge on the same weekend as the Grand Prix. The Ferrari Challenge, supported by Shell is a high performance racing series which gives Ferrari owners and enthusiasts a competition in which to enjoy their cars and challenge one another on the track. This is a true testimony to our technical partnership with Ferrari - everything we learn on the track helps us develop the fuels and lubricants we put on the road.
Make sure to check out our exclusive photos of Fernando Alonso’s appearance at a Shell filling station in Austin, and look out for Felipe Massa’s drive around COTA in the simulator on Facebook and Twitter. Also, see all the best bits from Free Practice, Qualifying and Race Day on our Flickr photostream.

We wish Alonso and Massa the best of luck in Texas.

Circuit Name: Circuit of The Americas

We're making a few changes to Inside Track, let us know what you'd like to see more of by emailing shellmotorsport@shell.com

Posted by Formula1Lionel at 10:55 No comments:

Scuderia Ferrari driver Felipe Massa helped kick off this weekend’s Formula 1 United States Grand Prix by treating a group of guests to virtual laps of the Circuit Of The Americas (COTA) in Shell’s state-of-the-art simulator. 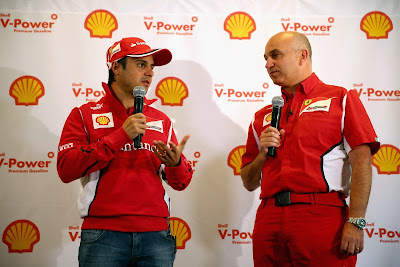 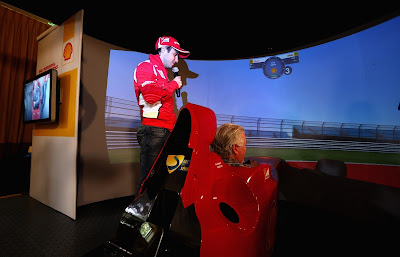 Posted by Formula1Lionel at 10:49 No comments: