This is the climate that circulates in the world

Candidates to crash into the car 22 in Brazil GP

Raikkonen - This is practicing for Rallys

Barrichello - Thus leaving the F1 doing something great for your country

Nakajima - Since I do not know the braking time

Kovalainen - Since this with her bag full of clout

Sutil - out the headlines of newspapers

Button - for having stolen the nickname of the "promise English"

Alonso - To keep the record for youngest champion

Piquet - to help his compatriot before being fired by Renault

Fisichella - to note that it is Italian

Rosber- for having a car is worse that he best pilot ...
- Why do not like grabs and hugs when exaggerated rises in a weighted podiun doubt his masculinity

Trulli - for not having liked your wonderful wine

Heidefeld - Well not quite ... but this just to stay in front of Hamilton will no longer crazy about não'poder overcome and batera in any wall

As you can see 99% of the twisted Massa that is 1% for that leftover think I am
Posted by Formula1Lionel at 22:08 5 comments: Links to this post 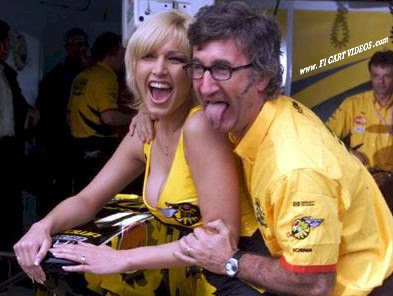 .Eddie Jordan is back, at least to make cents. Without popes in the language, spoke of the duel at Interlagos Lewis Hamilton and encouraged to play hard in wheel-to-wheel.

"People should not like what I will say, but if you try to get him out mass of evidence, as it did in Japan, then Lewis should be ready. If he tries something, Lewis will have to turn the steering wheel toward Massa for ensure that it does not finish the race. "

The Irish also assessed: "What happens in the championship depend on what Lewis learned in the last two tests. He was brilliant in China, it was perfect, but it was horrible in Japan if the Hamilton China is Brazil's, he will be champion" .

He needs to be careful. He knows now that the world is against him - the other pilots and the commissioners are in opposition. I think even if what happened to him after victory in Spa was terrible and punishment in the Japanese GP was very hard too. He has to learn to deal with it. "

I say Lionel Jorge Campos much more than hard with the punishments were wrong ... unjust wrong way ugly but said ... God is not fair to those who do things right .... and fixed .....

Have you seen that happen millions of times last year .. McLaren was the case with that of espionage lost .. .. 2 puerility times in the first escaped in one place ... and who is crushing on Monday pressed a wrong button.

This year the Ferrari not happy with the performance of the car tried to gain influence in the commission of FIA cry .... God ... hold the hose incredible .... eh .... the worst that human beings look and do not learn "If you do a certain thing earn 10 gifts from God ... Now if you do something wrong ... earn 10 punishment of God .... ... .. So what advantage do the right thing ....
Posted by Formula1Lionel at 22:07 No comments: Links to this post

Rubinho supposed to dialogue with Ferrari 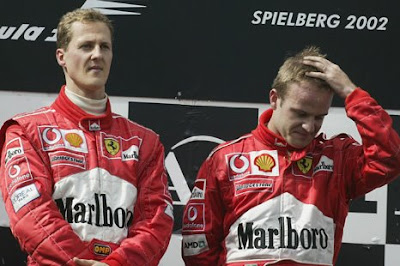 Everybody published ... and the famous reporter LEMYR MARTINS confirmed ... the Ferrari did not comment and neither family of Barrichello. . .
I just ask a question .... I ended up where Colin Chapman .... that date have not found a thread of hair if you want .....
Posted by Formula1Lionel at 21:39 No comments: Links to this post

Bridgestone heads to Brazil for the thrilling conclusion to the 2008 FIA Formula One Championship, where Bridgestone's medium and soft compound Potenza tyres will be put through their paces on the undulating 4.309km Autodromo Jose Carlos Pace for the Brazilian Grand Prix.
After the more recently designed or redesigned facilities of the last few races, the track in Brazil, which is also known as Interlagos, is somewhat more longstanding as it was last redesigned for the 1990 Brazilian Grand Prix. The circuit is well known for its bumps, although resurfacing over the years has diminished the impact of these. Significantly, the track was resurfaced in its entirety in 2007, prior to last year's race.
Cars will run in an anti-clockwise direction and face significant gradient change over a lap. This is a circuit where drivers do not have much time to relax, and its twisty infield section makes graining something which will be on teams' minds. The circuit surface often starts the race meeting very dirty, and improvements in lap times, as well as fewer mentions of graining, should be seen over the weekend as the surface improves.
Hirohide Hamashima - Bridgestone Director of Motorsport Tyre Development, said:
What challenges does Interlagos present?
"We expect a lot of graining, especially at the beginning of the weekend. There are two reasons for this; Interlagos often has a very dirty track surface and the twisty infield layout makes graining likely, regardless of the track surface conditions. Interlagos is a track which is deceptive as it is not as harsh on tyres as you would think, although the weather conditions can play a big part, especially if it is hot like it was last season."
Why has the tyre allocation changed from 2007?
"Last year we were too soft in our allocation and we saw blistering on many tyres, even those used by competitors who we would expect to be quite gentle on our tyres. We expect the medium and soft compounds be a good choice, plus the change will provide teams with a challenge, especially as the track surface will have evolved from last year when it was brand new."
Posted by Formula1Lionel at 17:44 No comments: Links to this post