Voicemail base for Honda 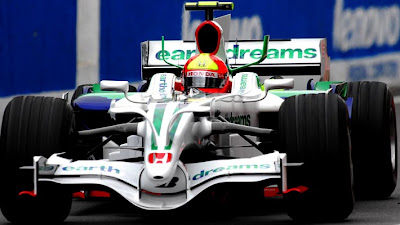 The Honda is making one of the biggest mistakes of his life to let go .... Barrichelo a pilot with the experience he does not think anywhere
1)It is super fast
2)EXPERIENCE has a super account that much after all .. who did not want to run 2009,2010,2011 Michael Shumacher ..... because of the experience .... young pilot did not know anything
3)Rubinho hit the car ... you know who you think they hit the car of Shumacher ... the problem is that you do not listen to what Honda Rubinho spoke .. You like all Japanese people want the thing super fast ... and put any money in the world thinking they will hit the car ... or want a super exchange for a pilot who can not do anything
4)The Toyota is the same thing puts a lot of money and want to reap short-term results .... is not no way to Ferrari this for many years managed to assemble a super team in a season of Michael completed the other not worth separate .. Ros Brawm nothing has experience ... but I do not think that alone worth so much money .. ese Braw was not really good Barrichello let go ...
5) It porisso that compliment the McLarenMercedes ..... at the beginning of 2008 would make the biggest boob to scare away ... Ron Dennis said that there were wrong and Directors of Mercedes decided to go back and keep Ron Dennis was the salvation of the team because Ron Dennis is the best chief of staff today and has no substitute ... and together we will continue winning 2009 champion McLarenMercedes easy .....
6)And Ferrari will continue missing and losing the only Toyota and Honda is missing the technological development both teams have money but I do not listen ... I have the project that makes the car go faster ... but I hear there are going to take years to get the wins
7)Will only receive the return on marketing that helps in the sale of cars worldwide Honda and Toyota the world loves to buy Honda and Toyota cars and loves to see the cars on track even if you do not win ... and can not ever stop to dispute
8) Rubinho is half donkey contracts is wrong and wrong at the time ... example should have accepted the offer of Ron Dennis in 1994 to be a pilot test .. aguns after years would be primary and win at least one 2 championships and went wrong at the time the Ferrari had won if he had stayed at least a 2 championships And do not listen to my project that makes the car go faster ... company proposed to register for the Honda sold there and won races and sure to run ... but Rubinho has no time for me .... but his chance .. Honda is not enchergar the talent of Barichello remains perhaps the Red Bull and Toro Rosso .... why Berg knows everything and will start to win and it would be very nice to have a super pilot experienced as Barrichelo .
Posted by Formula1Lionel at 16:01 1 comment: Links to this post