Posted by Formula1Lionel at 21:38 No comments: Links to this post

Posted by Formula1Lionel at 21:25 No comments: Links to this post

Ferrari is beautiful even when it hits!!


Ferrari makes success MARKETING POSITIVE up when it hits! ! !

I hope they never take the video from the internet because it is for all to see as pilots venture and how hard it is mastering these wonderful machines, this is my opinion congratulations to all involved sponsors, Ferrari, Kobaiashi, People Russo.Ferrai and Formula one more time making story.

by Lionel de Campos Jorge Journalist
Posted by Formula1Lionel at 18:04 No comments: Links to this post

All people have both good and bad... 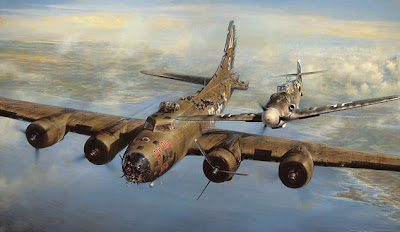 SAO PAULO (honor) - is a story that deserves to be known by everyone. I'll summarize ... Journalist of Formula 1 who sent ...


After bombing Bremen, the American B-17 was severely hit by German Messerschmitt fighters and was in tatters when he finally managed to get rid of the planes of the Luftwaffe, which they did not care much. The way he was, would not last long. Fall in the North Sea. Had blunt fuselage, breakdowns in the beak and tail, the crew killed and wounded, no firepower.

Rapidly lost altitude and the pilot decided to arrive in England, even though his chances were remotíssimas. He could have jumped with a parachute, and he still had conditions, but did not want to leave wounded aboard. Or trying to save his colleagues, or would all die.

Meanwhile, Lt. Franz Stigler took off from a nearby base in Germany for another mission and agonizing over finding the bomber. Could have given the coup de grace, which would give him the Iron Cross, the highest decoration for Luftwaffe who reach a certain number of kills.

But he realized that the American plane was on the verge of collapse. "My God, he's still flying?" If asked. He decided he would try to save those enemies. That would not be fair, honest, honorable topple who could no longer defend himself. Paired the plane and gestures to indicate tried another route to neutral Sweden. It was closer, they would have a chance.

In B-17, the Americans were not understanding anything. They were waiting for the inevitable attack, but not diverted its course. Were ten minutes communication attempts from German and perplexity of Americans. Stigler knew that the anti-aircraft guns on the ground and try to hit the enemy remained as a shield Americans. It worked, because the Germans would not shoot the bomber at the risk of hitting the Messerschmitt. There was one problem, though: it would be received by the Gestapo when he returned to the base and probably charged with treason and sentenced to death. Risked.

The bomber went to the airspace English and Franz gave up trying to convince his enemies that the route was ideal for Sweden. Returned. I never knew what happened to the B-17. To his surprise, he was not charged with anything. If someone saw what you did not tell anyone. Americans, incredibly, managed to land in England. The bomber pilot never knew who was that good German who refused to shoot down his plane.

Charlie Brown, the pilot, kept this story a secret until 1985 when, now retired in Florida, made the report at a meeting of war veterans. It ended up being published in a newsletter of an association of former German pilots. Five years later, the text came to Stigler, who from 1953 lived in Vancouver, Canada, where he emigrated.

The two met. And they proceeded to tell their stories in lectures around the world. Both died in 2008.

The story will flip book and movie. It's beautiful ... all people have both good and bad... by Lionel de Campos Jorge Jornalist
Posted by Formula1Lionel at 21:24 No comments: Links to this post

Tooned 50: Part One - A Night To Remember

Posted by Formula1Lionel at 23:07 2 comments: Links to this post

Tooned 50: The making of

Posted by Formula1Lionel at 23:05 No comments: Links to this post

Posted by Formula1Lionel at 22:13 3 comments: Links to this post

Posted by Formula1Lionel at 23:10 No comments: Links to this post