Posted by Formula1Lionel at 21:10 No comments: 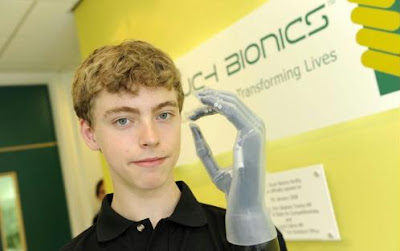 14 year old boy asks in a letter to Brawn, and Mercedes gives bionic hand
Mercedes bionic sponsored a new prosthesis for Matthew James, who was born without a left hand. The 14 year old boy sent a letter "exciting" to Ross Brawn, who decided to help him.
Matthew James, an English boy of 14 years of F1 fan, was born without a left hand and wore a prosthesis which he described as a "claw". After his school, located in the Berkshire region, visited by the head of the Mercedes, Ross Brawn, James decided to ask for help to the team.
Matthew sought a bionic prosthesis company Touch Bionics, which allows movement in the hand and fingers. However, the device costs more than 30 000 pounds (about $ 79 000), an amount that the boy's family could not pay. Matthew then sent a letter with your story to the Mercedes and suggested that the team sponsor for him a new prosthesis Touch Bionics
Matthew James, now with the bionic hand sponsored by Mercedes
According to Ross Brawn, the letter was "exciting", and the team decided to meet the request of Matthew. Mercedes invited him to visit the factory in Brackley and came into contact with Touch Bionics. The Scottish company and the team made an agreement to share technologies and as part of the deal, Mercedes helped pay for the training of the prosthesis from Matthew to use it.

While the prosthesis old boy's was just a mechanism to open and close like a clamshell, the new hand has five individual motors in each finger.

The bionic hand was deployed last Friday (12), and Matthew can already do simple tasks like opening jars and carrying cups. "Unfortunately, it has a downside. I'm having to do more work, "joked the boy.

is very good to hear a news like this! ! !
So I am pleased to disclose to the world to see .... Ross Brawn and CONGRATULATIONS to all of the Mercedes team! ! !

Posted by Formula1Lionel at 21:10 No comments:

A GRANA DO BRUNO

Posted by Formula1Lionel at 21:08 No comments:

This is the engine that Frank Williams hired for next year already and I have been speaking over the years to do this and Rubens Barrichello to renew will be champion in 2012 .. we're waiting ...
by Lionel de Campos Jorge
Posted by Formula1Lionel at 22:43 No comments:

Posted by Formula1Lionel at 22:35 No comments: